DALL-E 2 and the Future of Design 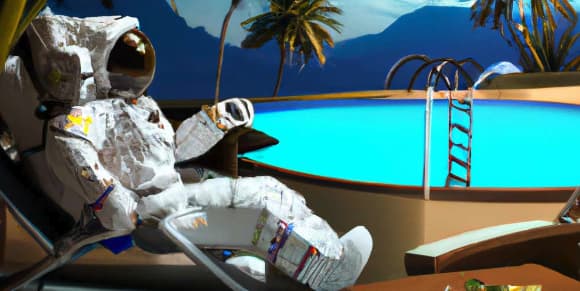 DALL-E 2 is a new artificial intelligence system that automatically creates and edits images simply by following natural language instructions you give it.

If that sounds futuristic, it's because it is. DALL-E 2 has taken AI watchers by surprise with its advanced ability to perform the creative work of image creation. It was put best by Sam Altman, CEO of OpenAI, the company that built DALL-E 2:

"A decade ago, the conventional wisdom was that AI would first impact physical labor, and then cognitive labor, and then maybe someday it could do creative work. It now looks like it’s going to go in the opposite order."

That's putting it lightly. DALL-E 2 is a major AI milestone and has huge implications for entire professions and business models.

This post serves a primer on what DALL-E 2 is, what it can do, and why this all matters. It also contains some (hopefully valuable) speculation on how this technology might be used by marketers to transform their work, now that the tool is commercially available.

DALL-E 2 is an AI system created by OpenAI (of GPT-3 fame) that automatically creates original art and imagery based on natural language prompts.

That means you type in a description, and DALL-E 2 creates a piece of art or an image based on what you type. You can even tell DALL-E 2 to create the image in a specific style. Check out the example below of “An astronaut lounging in a tropical resort in space in a photorealistic style”...

You can also tell DALL-E 2, using natural language, to make specific edits to existing images. For instance, you could tell it to “add two flamingos in the background” of a picture—and it will do so automatically.

DALL-E 2 is the next evolution of OpenAI’s DALL-E system introduced in 2021. It builds on that system by offering more realistic, accurate image generation with quadruple the resolution. (The name DALL-E is a nod to the artist Salvador Dali and the Pixar movie robot WALL-E.)

When Will DALL-E 2 Be Available?


On July 20, 2022, OpenAI announced that DALL-E 2 is now available in beta. In the weeks following the announcement, OpenAI plans to invite 1 million people from the DALL-E 2 waitlist to use the tool. Importantly, users will retain full commercial rights to the images they create. That means you can use DALL-E 2 images in any use case for your business or product that you dream up.

To an extent, yes. In the first month after you receive beta access, you get 50 free credits to use to generate images using DALL-E 2. After the first month, you receive 15 free credits each month. One credit will get you four images generated by DALL-E 2 based on a single prompt. Or, you can use one credit to edit or vary a prompt, returning three additional images.

Beyond that, you have to pay for additional credits. OpenAI currently charges $15 for 115 credits. Credits must be bought in 115-credit blocks.

OpenAI also offers financial assistance for artists. You can apply for subsidized access to DALL-E 2 here.

DALL-E 2 uses sophisticated deep learning AI called a “generative model” (powered by neural networks) to not only create images from natural language, but also understand the relationships between objects in the image.

“DALL·E 2 has learned the relationship between images and the text used to describe them. It uses a process called “diffusion,” which starts with a pattern of random dots and gradually alters that pattern towards an image when it recognizes specific aspects of that image.”

This sounds like a technical detail but is actually a big deal. Historically, neural networks like the one used in DALL-E 2 have historically not been good at understanding the relationships between objects.

That’s a simplistic example, but the idea is this:

If your neural network can’t generalize its performance to data it’s never seen before; it’s not that useful. You’d have to retrain it constantly, which defeats the purpose of using self-learning AI.

Historically, it’s been very hard to get neural networks to work generally on different tasks. Despite being incredibly powerful, this has made neural networks often useful and valuable only for very limited and specific tasks.

However, DALL-E 2 represents a breakthrough here—at least in the area of image generation.

DALL-E 2 can consistently create different types and styles of images, even when the input (your description) changes. It can be generalized to many types of image creation.

The results speak for themselves…DALL-E 2 can create as many types and styles of images as you can dream up. See some examples below shared by OpenAI.

"a raccoon astronaut with the cosmos reflecting on the glass of his helmet dreaming of the stars"@OpenAI DALL-E 2 pic.twitter.com/HkGDtVlOWX

DALL-E 2’s incredible capabilities also make it dangerous. The possibility of generating highly realistic original images could be misused by bad actors to generate fake or offensive content at scale. In fact, this is why OpenAI waited many months to make the tool commercially available.

In those months, OpenAI "worked with researchers, artists, developers, and other users to learn about risks," says the company. Based on that work, OpenAI has laid down some guardrails that govern how the technology may be used. These guardrails include:

Why DALL-E 2 matters to marketing and business leaders

This groundbreaking natural language generation model began as a research project. It was then opened up for commercial use, which caused an explosion of AI-powered content generation tools. Finally, it was exclusively licensed to Microsoft.

The same is now happening with DALL-E 2. The tool is now commercially available, and we expect some serious opportunities—and disruptions.

DALL-E 2 could severely disrupt the work and earning power of many designers, artists, photographers, and visual content creators.

We’re generally very optimistic that AI will create many more jobs and economic opportunities than it destroys. But this is one area where AI may erase jobs. That’s not to say designers, artists, photographers, and creatives will go away. But their current work just got a lot less valuable in the marketplace.

“A decade ago, the conventional wisdom was that AI would first impact physical labor, and then cognitive labor, and then maybe someday it could do creative work. It now looks like it’s going to go in the opposite order.”

If you’re a stock photo business, DALL-E 2 might be your worst enemy. Stock photos already have a reputation as cheesy and inauthentic, but have been a necessary evil for content creators. That changes the moment DALL-E 2 becomes available for commercial use.

What justification would there be to pay for a stock photo license in a world where DALL-E 2 can create any image you want?

It’s not all bad news. DALL-E 2 will likely be great for marketers. Consider how much time and money we spend on:

These tasks all become faster and cheaper with machine-assisted image generation. That frees up marketers to focus on higher-value work versus spending hours clicking through pages of stock photos.

There's even an argument that DALL-E 2 will make many business professionals more creative. Why? Because anyone with an idea for a visual can make it a reality using DALL-E 2. Sam Altman at OpenAI puts this well when he says:

"It’s an example of a world in which good ideas are the limit for what we can do, not specific skills."

8 Ways Marketers Could Use DALL-E 2

It's still early days for DALL-E 2. But marketers need to start thinking now about how to incorporate AI-powered design technology like DALL-E 2 into their work.

Here are a handful of ways we think DALL-E 2 could be valuable to marketer by allowing them to create:

What other uses do you see for DALL-E 2 in marketing or other areas of business?

What's trending in AI and marketing news? MIT is solving for the AI talent shortage with a $1 billion new school initiative, Adobe teased a new set of AI-powered brushes for illustration, and Memory raised $5 million in funding for their AI-fueled time tracking app Timely.

We put AI writing tools to the test…and the results were interesting. Plus, Google’s future in a ChatGPT world, and MyHeritage’s AI Time Machine.

MyHeritage AI Time Machine: What It Is and Why It Matters

MyHeritage AI Time Machine is a new tool that creates stunning AI avatars of you in different time periods.