Google’s DeepMind division is responsible for driving the company’s artificial intelligence efforts. DeepMind was acquired in 2014 by Google for north of $500 million, and its staff have the stated purpose of creating “general-purpose learning algorithms” that can perform a variety of cognitive tasks (instead of just doing one narrow activity very well).

On October 18, 2017, DeepMind made an announcement that showed just how much progress it’s made towards that goal—and it has big implications for marketers. It all starts with a little AI system called AlphaGo Zero.

What Is AlphaGo Zero and Why Is It Important?

In 2015, Google unveiled that its AlphaGo artificial intelligence system had handily beaten a human champion named Lee Sedol at Go, a popular strategy board game that’s been played for 2,500 years. AlphaGo was trained by Google’s DeepMind division over many games using data on the best human moves and lots of practice. Unleashed on Sedol, the system beat him four games to one. The victory was seen as a major AI milestone, given that Go is often considered far more complex than chess.

But an even bigger milestone occurred in October 2017, and it has serious implications for professionals, including marketers, whose industries are about to be flooded with AI. Google DeepMind announced in an article published by Nature that its AlphaGo Zero system crushed the previous AlphaGo system by 100 games to zero.

That wasn’t the impressive part.

What really stirred the AI community was that AlphaGo Zero became almost superhuman at Go using only the game’s rules and playing millions of games against itself.

What this means is that the AlphaGo Zero system learned how to play better than anyone—or any system—in the world using only first principles. By running millions of instances of trial and error, the system essentially reverse-engineered the best tactics used in Go, without being trained on any of this knowledge. Whereas previous AlphaGo systems were trained on best moves using actual data on those moves, AlphaGo Zero figured it all out on its own.

And it did so blindingly fast. Within three days, AlphaGo Zero surpassed the previous system that beat Lee Sedol. Within 40 days, it had surpassed every other AlphaGo system in existence to become, arguably, the best Go player in the world.

The system did this without using historical data. This is enormously important in artificial intelligence. Usually, AI systems require large datasets to discover insights, surface information, and make recommendations. While AlphaGo Zero’s approach has not yet been tested outside the game of Go, it proves that, at least in one domain, it is possible for a self-learning system to “create knowledge” without relying on past information, according to DeepMind.

The implications are vast for marketers and business professionals of all stripes. After all, says DeepMind:

“Our results comprehensively demonstrate that a pure reinforcement learning approach is fully feasible, even in the most challenging of domains: it is possible to train to superhuman level, without human examples or guidance, given no knowledge of the domain beyond basic rules.

Humankind has accumulated Go knowledge from millions of games played over thousands of years, collectively distilled into patterns, proverbs and books. In the space of a few days, starting tabula rasa, AlphaGo Zero was able to rediscover much of this Go knowledge, as well as novel strategies that provide new insights into the oldest of games.”

Why AlphaGo Matters to Marketers and Businesses

This engine would be able to recommend marketing strategy based on past marketing performance better, faster, and cheaper than humans. Roetzer started down that path by releasing Marketing Score, a free online tool that assesses your marketing foundations, forecasts potential, and aligns expectations. 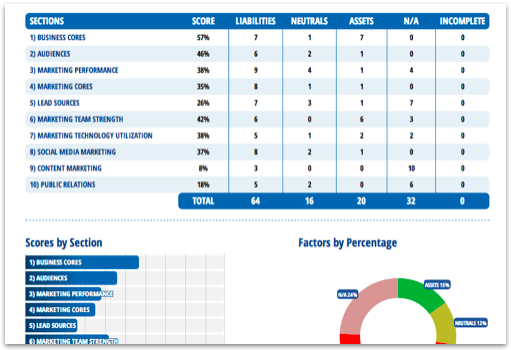 Marketing Score is just a beginning. It relies on humans to rate their marketing programs across 130 different factors. It then uses human-coded algorithms to weight these responses and highlight marketing assets, gaps, and opportunities. Right now, the system is limited by the amount of data available to it and the human-devised rules that parse this data. It does not learn on its own or iteratively teach itself to improve.

There are some big reasons why a true marketing intelligence engine that learns and recommends on its own doesn’t yet exist.

Access to data is one reason. Even today’s most sophisticated marketing automation and CRM platforms still lack complete visibility into the exact activities marketers took and how much they cost to produce a given result. If this data were to become available, these systems could potentially recommend actions based on historical performance and budget data.

Lack of sophisticated models is another reason. Even with the right data, we’d need highly sophisticated algorithms capable of recommending the right actions with a high enough rate of success that you could truly rely on such an engine to produce real marketing results. But, it is currently unclear if humans could create these models.

For our hypothetical superhuman marketing intelligence engine to exist, we need huge amounts of data and the right human expertise to even test if it could work.

Except, what if we didn’t?


“Artificial intelligence research has made rapid progress in a wide variety of domains from speech recognition and image classification to genomics and drug discovery. In many cases, these are specialist systems that leverage enormous amounts of human expertise and data.

However, for some problems this human knowledge may be too expensive, too unreliable or simply unavailable. As a result, a long-standing ambition of AI research is to bypass this step, creating algorithms that achieve superhuman performance in the most challenging domains with no human input.”

The question then becomes: Are key marketing tasks more complex than the game of Go? If our answer is “no,” then we face the possibility that the right self-learning AI systems could become more adept than humans at recommending marketing strategies to achieve certain goals (traffic generation, lead generation, conversion optimization, etc.).

Imagine a world where a “Marketing Score Zero” system is given a rule set and a goal (say, lead generation), then, based on a few key parameters—say, time available, staff available, budget, etc.—tells you the actions that are most likely to generate the most leads. Such a system could replace partially (or entirely) the need for human consultation in the marketing industry, a change that could have major implications for agencies and corporate marketers.

A Framework to Understand AI in Marketing

Notice there were a lot of “coulds” in the preceding section. The goal of this thought experiment isn’t to alarm, it’s to educate. AlphaGo Zero is a significant development in AI, and it has the potential to affect many marketers. The goal is to prepare now to work hand-in-hand with machines to create more value than humans and machines in isolation.

AlphaGo Zero proves that the technology already exists to fundamentally alter how artificial intelligence systems learn, removing the barriers of having lots of data or the right human expertise. If this technology applies to other industries or tasks, it doesn’t need a lot of historical data or any experts at all (except machine learning engineers) to reason its way to success.

It’s entirely possible that AlphaGo Zero-like self-learning will not translate to marketing. But given the complexity of Go and the astonishing ability of the system to engineer success based only on first principles, we suspect this technology will, in a significant way, have an impact on the marketing industry in the future.

But to better assess the impact of systems like AlphaGo Zero and the hundreds of other AI tools being released, we need a framework.

Not all AI systems can do what AlphaGo Zero can. Not all AI systems are built to do even remotely similar things. The field of AI encompasses a lot of different technologies at varying degrees of maturity. Add on top of this the tendency of media publications to overhype some AI developments, and you have an environment where it is extremely difficult for marketers and business professionals to cut through the noise. At the Marketing AI Institute, we created the 5Ps of Marketing AI framework after interviewing 25+ marketing AI providers about their companies and AI technology. It breaks down marketing AI into five major use cases:

The capabilities behind AlphaGo Zero could reasonably fit into the Planning phase, if the system was ever applied to marketing. The Planning phase is currently the least mature, in our assessment. It requires the most subjective human expertise, analysis, and creativity. But its very complexity illustrates an important point: If this is the most human-friendly aspect of marketing, and it is potentially doable by a sophisticated system based on the principles behind AlphaGo Zero, what does that mean for marketers? How will agencies and corporate marketers create immense value in the age of artificial intelligence? How can these professionals learn to augment and enhance their work with machines, rather than watch it become automated?

These questions are integral to ask. They require ongoing research, analysis, and conversation to answer. At the Marketing AI Institute, we’re connecting the dots daily for marketers who understand the need to learn more about artificial intelligence. We encourage you to subscribe to learn answers to these questions and more. Systems like AlphaGo Zero prove we need to accelerate our efforts to profitably incorporate AI into our marketing. To get started doing that, check out the related reads below: